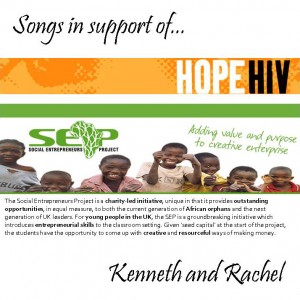 Twynham School in Christchurch issued a challenge to students in 2011, to think of a way to raise money for the Charity HopeHIV. This organisation helps those affected by AIDs and HIV in sub-Saharan Africa in practical ways.

School friends Kenny Aruwa and Rachel Alcock decided to record an EP of simple songs as quickly as possible, and get them on sale at school. Recording took place in the lounge and after a few hours work on artwork design and duplication, the first batch was ready to go on sale. Over 100 copies were sold, raising about £550 for the charity.